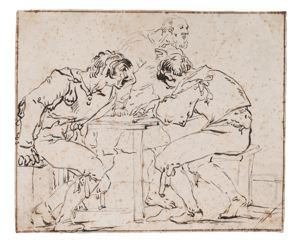 Formerly attributed to Andries Both, Leonard Slatkes has suggested that the present drawing instead be credited to the Delft-born artist Leonard Bramer, comparing this work with a Denial of St. Peter of 1642 (Rijksmuseum, Amsterdam) and a related work in the Witt Library.1 Though born in the Netherlands, Bramer left for Italy in 1614 and was a founding member of the Bentvueghels, a community of Dutch artists who lived together in Rome.

Bramerâs Three Men Around a Table is an enigmatic drawing, both in subject matter and stylistically within the artistâs oeuvre. It is unclear what exactly Bramer has chosen to depict. The seated figures can be seen gazing intently at something blocked by the left arm of the figure at right while the standing figure appears to have been interrupted by something or someone to the right of the image. A singular identifiable detail is included in this sceneâthe precariously positioned clay pipe resting at the front of the table. Two rapidly sketched ovals on the table can also be seen below the outstretched hand, probably coins. The inclusion of a pipe and coins suggests that we are witnessing a game of cards, though curiously no cards are visible. Stylistically speaking, Bramer is known to have executed works in pen and brown ink. However, by far the largest number of Bramerâs surviving drawings were done in brown or grayish-black ink applied with the brush with the addition of wash.

The influence of Bramerâs time in Italy on his conception of this drawing is unmistakable. At the time of its exhibition in 1985, Rina C. Younger noted that the work is âstrongly reminiscent of Caravaggioâs The Calling of St. Matthew in San Luigi dei Francesi in Rome,â a work Bramer would have known well from his time in that city.2 Such Italianate influence might equally be seen in the conception of the figureâs heads, which, in their summary nature, recall the caricature drawings of the Carracci. Given the distinctive Italianate influence in this work, one is tempted to see it as an early work executed during Bramerâs stay in Italy.

Your current search criteria is: Objects is "Three Men Around a Table".