Shepherd on a Donkey, a Shepherdess Next to Him 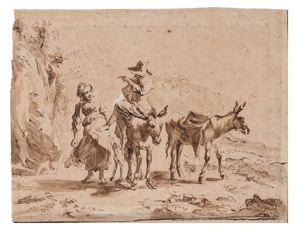 Shepherd on a Donkey, a Shepherdess Next to Him

While Nicolaes Berchem is no longer a household name, he was enormously influential in the development of an Italianate aesthetic in Dutch landscape art of the seventeenth century. The son of the still-life painter Pieter Claesz, Berchem soon came under the influence of Haarlem-based Italianate painters such as Jan Both, Pieter van Laer, and Jan Asselijn, all of whomâunlike Berchemâhad spent a portion of their careers in Italy (for more information on the relationship between these artists and Berchem, see the catalogue entry on his work Winter Scene with Figures on a Frozen Canal). Like these artistsâ paintings, Berchemâs pictures tend to be infused with the warm, golden light of the Italian countryside and populated by picturesque peasants of the kind we see in this drawing.

Though formerly attributed to Berchem himself, the Herman sheet is in fact a copy after an etching by Jan Visscher, who, following the death of his elder brother Cornelis in or around 1658, became responsible for the replication of Berchemâs drawings in print. That the Herman drawing is a copy is confirmed by the fact that it is oriented in the same direction as Visscherâs print, which implies that the print served as its model. Berchemâs original preparatory drawing, now in the Pushkin Museum in Moscow, is in the reverse of both the Herman drawing and Visscherâs print.1 That drawing was originally part of a series of six drawings that was among Berchemâs most famous and widely reproduced works at the end of the seventeenth and early eighteenth centuries. The Moscow sheet passed through a number of the most important drawing collections in the eighteenth century.2 Further attesting to its fame, the printmakers Paulus van Somer and Gerret von Schagen made etched copies of Visscherâs print in the late seventeenth century.3

The handling of the Herman sheet shows a clear understanding of Berchemâs manner of drawing, but the anonymous artist has employed pen and brown ink with brown wash as opposed to the black chalk and gray wash Berchem used to create the original. Some details, such as the background mountains, confirm the intermediary role of Visscherâs print. While Berchemâs original delineates these forms with an almost transparent wash that conveys the Italian light with only the most summary of strokes, the medium of etching required Visscher to reproduce the mountains in lines. The execution of the mountains in the Herman sheet shows a similar interest in developing form predominantly through lines. Given these differences in conception, it seems probable that the Herman sheet was produced by someone with a clear knowledge of Berchemâs drawings but most likely not under his direct influence.

Your current search criteria is: Objects is "Shepherd on a Donkey, a Shepherdess Next to Him".