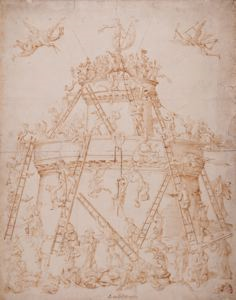 On two large sheets of thin paper, The Allegory of Fortune depicts a great number of people attempting to scale a large, two-tiered fortified tower, at the top of which is perched the nude figure of Fortune flanked by the winged figures of Time and Death. Fortuneâs current favorite rejoices, seated below her feet on the wheel of fortune, and surrounded by Fortuneâs favored few in the top level of the tower. Figures representing many classes and professionsâa painter and a musician at left among themâstrive to erect or climb ladders to ascend to the first level and then to the second. Some attack one another (notably two academics at left); a few help their fellow strugglers; a number fall with Deathâs arrow in their chests. An inscription at the bottom of the sheet, âLe vicende del mondo,â or the âThe ups and downs of the world,â succinctly conveys this workâs pessimistic view of Fateâs capriciousness and human struggles for wealth, power, and status.

Like many drawings in this collection, The Allegory of Fortune is related to printed material, in this case, two Italian popular prints, a sixteenth-century woodcut attributed by Miles Chappell to Cristofano Bertelli and an etching by Giuseppe Maria Mitellli dated 1678.1 Like the etching, the Herman drawing reverses the Bertelli woodcut, but is otherwise very close to Mitelliâs etching except that it lacks the many inscriptions on the etching. The absence of texts might suggest that the Herman drawing was a working study for the etching rather than a copy of the etching, since we might expect an otherwise meticulous copy to include the many labels. The drawing also lacks the tree seen at the top in the print versions of the composition, which renders pointless the presence of the men with the poles in the top of the tower who try to knock riches down from the tree.2 Chappell identified specific stylistic differences from Mitelliâs known drawings, leading him to propose that the drawing is, in fact, a copy of the etching.3 Another possible explanation for this drawing is that it is a copy made in Mitelliâs shop to preserve the original composition, which would be damaged in the process of transfer to the plate.4

In addition to reversing Bertelliâs woodcut, both drawing and etching change the earlier composition by replacing all the monks, bishops, and other clerics in the woodcut with a variety of characters, among them Turkish monarchs and soldiers. Chappell may well be correct in assuming that the clerical figures were removed because of the pressures of the Counter-Reformation; but in the second half of the seventeenth century the Turkish threat was very much on the minds of many Europeans. The choice to include Turks may well have had a topical appeal to the contemporary market.5

Your current search criteria is: Objects is "The Allegory of Fortune (Le Vicende del Mondo)".