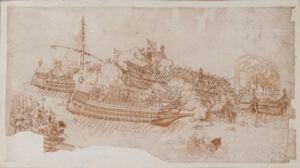 This drawing depicts episodes from the Battle of Lepanto, a five-hour sea battle between the so-called Holy Leagueâa force comprising the Kingdom of Spain, the Republic of Venice, the Republic of Genoa, the Papal States, and several smaller Christian affiliatesâagainst the Ottoman Empire.1 Fought off the western edge of Greece on 7 October 1571, Lepanto is generally considered the last large-scale galley battle in history, and it was a decisive victory for the European powers in their attempt to prevent further Ottoman encroachment into the Mediterranean. Given its historical importance, the battle soon became a favored subject matter for painters like Titian, who allegorized its events in a painting of 1572â1575, and printmakers, who more literally depicted the event as a violent confrontation between the two naval forces.2

Martino Rota (ca. 1520â1583), a Dalmatian immigrant to Italy, was among the first to capitalize on the subjectâs popularity, executing a number of prints related to this theme. Rotaâs most famous print of the battle is a large-scale engraving executed in 1572 that emphasizes the drama of the battle itself.3 Indeed, the anonymous Italian artist responsible for the Herman sheet copied much of the lower left-hand portion of this print, which depicts typical galley-style fighting, in which the ships ram each other, allowing soldiers to board the enemy vessels to engage in hand-to-hand combat.4 While the drawing is mostly a verbatim copy of Rotaâs print, including the figures holding halberds at lower left and the small boat in the right foreground, he also made subtle changes, as in the execution of the smoke at the far right of the image. Working in pen and ink, this artist was not constricted by the limitations posed by etching and engraving and conceived of his smoke in washes as opposed to the tightly knit networks of etched lines seen in Rotaâs print.

Though it has previously been suggested that the Herman drawing might be preparatory for Rotaâs print, there are several factors that make this unlikely. First, no preparatory drawings by Rota are known, making it impossible to determine his drawing style. Second, the Herman sheet is executed on a larger scale than the print. Finally, the Herman sheet is executed in facsimile, while one would expect a preparatory drawing to be in reverse of the printed work. Given the great popularity of both the subject matter and Rotaâs prints in sixteenth-century Italy, it would seem likelier that this work was executed by an anonymous artist working from the print, possibly a younger artist in Rotaâs studio learning the rudiments of drawing.

Your current search criteria is: Objects is "Battle of Lepanto".