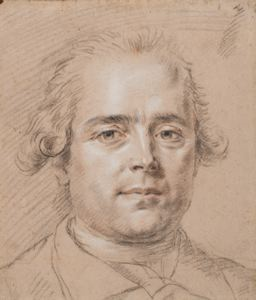 The author of this stunning portrait was recently identified as Claude Jean Baptiste Hoin by the New York dealer Richard J. Collins.1 Hoin was a pupil of the celebrated painter and draftsman Jean-Baptiste Greuze (1725-1805), and it was to Greuze that this drawing was attributed when the Hermans acquired it in 1970. Comparison of the Herman sheet with Hoinâs Self-Portrait in red and black chalk in the National Gallery of Art in Washington, and with a Head of a Man executed in red and black chalk with white heightening in the Metropolitan Museum, New York, bears out the attribution to Hoin.2

Though portraiture as an artistic genre is difficult to define, it can be characterized as any representation âin which the artist is engaged with the personality of his sitter and is preoccupied with his or her characterization as an individual.â3 Over time, trends towards idealization and realism in portraiture have waxed and waned. In eighteenth-century France, however, accurate likenesses were highly valued, especially those that capture both the sitterâs exterior appearance and her or his interior vitality. The Portrait of a Man fully achieves these dual aims, treating the anonymous sitter with what feels like frank directness and psychological immediacy.

The three-chalk method of drawing, popularized in France by Jean-Antoine Watteau at the beginning of the eighteenth century, is evocatively used in the Portrait of a Man: black chalk defines the forms, red brings warmth to the flesh, and white creates sparkling highlights on the skin. The combination of these chalks is particularly effective in the execution of the sitterâs facial features, notably his soft, three-dimensional mouth and penetrating eyes. The relatively high level of detail present in these areas, however, is delicately balanced with a rapidity of touch elsewhere in the composition. This equilibrium in draftsmanship transmits a sense of immediacy while preventing the drawing from becoming lifeless through over-polish. The discrepancy in finish between the Portrait of a Man and the drawing on the reverse, a lively and equally candid but much less finished sketch, seems to indicate that this sheet was a working drawing in a studio context.

Your current search criteria is: Objects is "Portrait of a Man (recto); Sketch of a Lady (verso)".