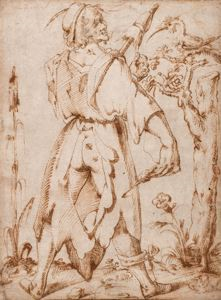 In addition to its enchantingly comical subject matter, this drawing is of interest because it has been pounced or pricked for transfer. This technique involves the outlining of a composition with a series of small holes, through which a powdery medium, often charcoal, is dusted or, in the case of this drawing, rubbed, transferring the design onto the surface to be painted. Employed in the creation of paintings and frescos, pouncing was also used in the making of woodcuts. Indeed, the size of the drawing and the bold and direct style of its draftsmanship suggest that the "Young Man Holding a Distaff and Spindle" was most likely a preparatory drawing for a woodcut, though no print corresponding to this drawing is known.

This drawingâs subject was also characteristic of printmaking in the late fifteenth and first half of the sixteenth centuries when the battle of the sexes was a popular motif in Northern Europe. In the "Young Man Holding a Distaff and Spindle," we see an unusual combination of two of the major iconographic motifs of this âbattle,â in that the man has been emasculated both through his taking up of the distaff and spindle, the emblematic tools of womenâs work, and through the loss of his pants, which was equated with the loss of the husbandâs dominance in marriage. The latter idea was common from the fourteenth century onward and is still familiar today. That the man is grinning is further confirmation that he is a fool. While subjects like the battle for the trousers and the power of women ostensibly depict the normative patterns of society thrown into chaos, this iconography functions in effect as a means of stabilizing and reinforcing the governing hierarchies through this gender inversion.

*Katherine Baker, graduate intern working with Larry Goedde
For pouncing, see William W. Robinson and Martha Wolff, "The Functions of Drawings in the Netherlands in the Sixteenth Century," in The Age of Bruegel: Netherlandish Drawings in the Sixteenth Century, ed. Mary Yakush and Sara Day, Cambridge, England, 1986, 26. For its use in woodcut, see David Landau and Peter W. Parshall, The Renaissance Print: 1470-1550, New Haven, 1994, 22.

*For a discussion of the distaff as the symbol of womanhood and femininity, see H. Diane Russell and Bernadine Ann Barnes, Eva/Ave: Woman in Renaissance and Baroque Prints, New York, 1990, 194. For the battle over the trousers and related themes, see Keith P. F. Moxey, Peasants, Warriors, and Wives: Popular Imagery in the Reformation, Chicago, 1989, 104 and 156.

Your current search criteria is: Objects is "Young Man from the Rear, Holding a Distaff and Spindle".