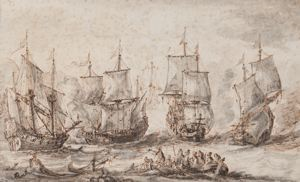 Despite its diminutive scale, this sheet depicts no fewer than six ships in battle, while another sinks in the foreground, and two boats pick up survivors. One ship at left is sailing close-hauled apparently to join in the battle that clouds of cannon smoke indicate is under way between the two vessels to the left of center. Both of these ships (one mostly concealed by smoke) are shivering their sails to bring them to a halt so they can fully engage in the fight. To the right two ships appear to be closing for battle, while a sixth is faintly visible at center seen from the stern. The small boats in the foreground rescue men pleading for help in the water, while one figure fires a gun at one of the ships. Curiously, neither the numerous flags nor the stern board of the ship at left identifies even the nationalities of the combatants. The drawing nonetheless vividly evokes the naval warfare of the Dutch Golden Ageâmost likely in this case the Dutch and English wars of the 1650s and 1660s.

This drawing entered the Herman Collection with a dealerâs attribution to the Flemish marine painter Bonaventura Peeters and an identification of the subject as âpresumably depicting a sea battle between Dunkirkers and States warships in 1638.â1 Nothing substantiates either the attribution or the subject. George Keyes suggested an attribution to Reinier Nooms Zeeman, and comparison with drawings and etchings by or attributable to this artist bears him out.2 Nooms, who signed many of his works âZeemanâ (Seaman), was a Dutch seascape specialist who, in addition to paintings, produced numerous etchings of marine subjects and city views, often in series. The rightmost ship in the Herman drawing strongly resembles a ship in one of his etchings, and the entire drawing is closely related in conception and scale to this and other battle etchings by Nooms.3 This sheet also resembles a number of drawings attributable to Zeeman, including a battle scene that appeared on the art market in Paris in 1996,4 and a drawing in the British Museum that served as the preliminary study for one of his etchings.5 Both display the somewhat tremulous line, the preoccupation with rendering reefing lines and tears in sails, and the elongation of the lower outer corners of flags. The seemingly inconsistent perspective of the Herman drawing, with the two vessels at right seen from a slightly higher vantage point, is found in some of Zeemanâs battle drawings;6 and the foreshortening of these vessels resembles that seen in a number of his etchings. 7

Your current search criteria is: Objects is "Sea Battle".